Battered by the global recession and competition from other Caribbean destinations, Barbados has a new spring in its step these days. By Colin Harding

Barbados has long been known as the most ‘English’ of Caribbean islands – a favourite upmarket destination for Brits in search of winter sun and a safe, welcoming environment, with some comfortingly familiar features.

Think driving on the left, red pillar boxes, afternoon tea on the lawn at the Fairmont Royal Pavilion hotel and a gentle few hours of leather-on-willow at Bridgetown’s Kensington Oval cricket ground.

There is still much truth in this image, and some 180,000 Britons visit the island every year. However, Barbados has had quite a thin time of it in the past few years, as a result of the global economic downturn that began in 2008, and higher taxes on air fares from Britain have not helped. It is not a poor island – Barbados is ranked 48th out of 183 countries in the World Bank’s GDP per capita league table – but it is heavily dependent on tourism, and unemployment soared when visitors decided to stay away.

There is also increasing competition from other Caribbean islands to contend with, not to mention the burgeoning resorts of the Caribbean coasts of Mexico, Belize and Colombia. In a recent Caribbean Journal round-up of the 25 best all-inclusive resorts in the Caribbean, not one of them was in Barbados.

So, what does Barbados have to offer in addition to the sun, sea and sand that all Caribbean destinations have in abundance? Well, the locals have woken up to the appeal of the distinctive elements of the culture and history of this surprisingly diverse little (21 miles by 14) island.

For a start, some of the 500-odd sugar plantations that once covered every available acre of land, making fabulous fortunes for English planters for hundreds of years have been carefully restored as museums.

The best-known is St Nicholas Abbey, historic home of the Warren family, on Cherry Tree Hill, where the old steam mill can be seen in action grinding cane on special occasions. It also makes it own rum – about the only use that Barbados’s few remaining cane fields are put to these days. There is another beautifully preserved 300year-old plantation house at Sunbury.

Traditional stone windmills that used to power the machinery, some still with their sails in place, also dot the island, many cared for by Barbados’s National Trust, which marks its properties with the familiar blue plaques. 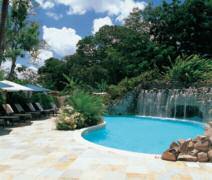 Then there are the densely wooded highlands in the centre of the island, which go up to 1100 feet. They feature an attractive natural park donated by Barclays Bank, which is protected from development, and for horticulture enthusiasts there are magnificent tropical gardens all over the island: the 65-acre Andromeda gardens near Bathsheba and the Flower Forest at Richmond Plantation are just two of them.

Barbados’s distinction as the only Caribbean island made of porous coral means it also has some spectacular caves, such as the labyrinthine Harrison’s Cave, in the centre of the island, which was unexplored until the Seventies, and the nearby Welchman Hall Gully, formed when a cave roof collapsed. The parish church of St John, 800ft above sea level, is also worth seeing – the present Gothic building was finished in 1836, but some of the graves in the churchyard date back to the earliest days of British settlement in the 1600s.

On the rugged east, or Atlantic, coast there is first-class surfing and other watersports at Bathsheba, where there was a big international competition last November.

In the sun, sea and sand category, probably the best beach of all is at the luxurious Crane resort in the south-east corner, between the east coast and the more downmarket hotels and resorts of the south coast – it is reckoned to be one of the ten best in the world.

The food is generally excellent, particularly seafood: red snapper , mahi mahi (disconcertingly known as dolphin in Barbados, but unrelated to Flipper), flying fish, barracuda, swordfish, tuna… all of which can be eaten in the street at Oistins on a Friday evening. On our trip, we ate at The Cliff Restaurant, website: (www.thecliffbarbados.com)

For tailor-made tours of the island by car – which can be done easily in half a day – try Terrvette Tours and Taxi Service, tel: 001 246 2619554, email: (terrvettetours@caribsurf.com)

The drink isn’t bad either. There are dozens of cocktails, generally based on Mount Gay rum (the oldest in the world, they say, dating back to 1703) in one guise or another – the ubiquitous rum punch, with nutmeg sprinkled on top, is a must. You may be offered one on arrival at your hotel if you’re lucky. The Banks beer is also very acceptable. Fancy a drink on the beach? Try the Mullins Beach Bar , website: (www.diningwithus.net/mullins).